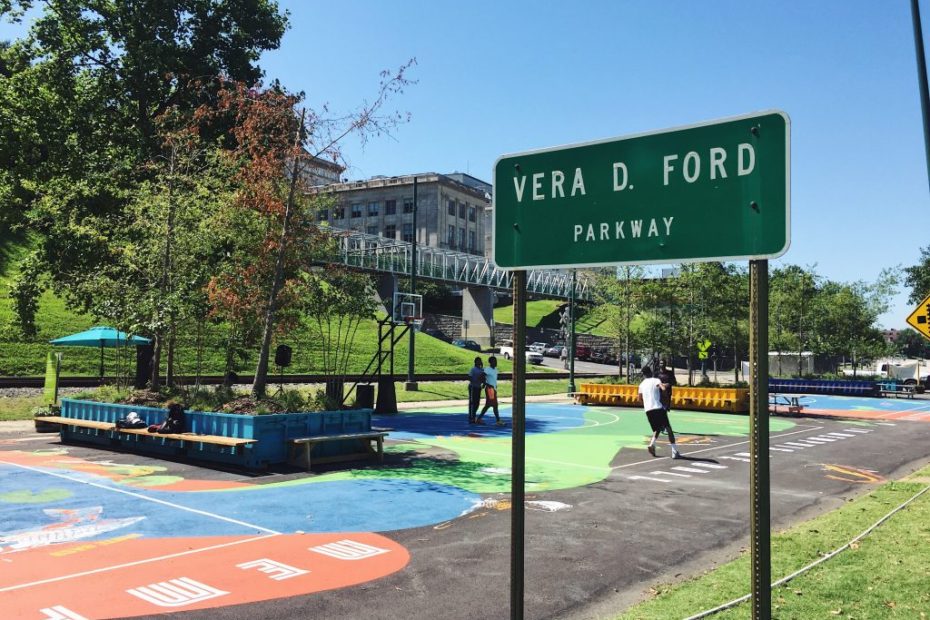 As part of today’s programming at APBP PDS 2017, some of our team got to go on a walking tour along the Memphis Riverfront and learn about present and future Civic Commons projects designed to bring disinvested spaces back to life.

We saw a fantastic example of pop-up infrastructure: the RiverPlay park on Riverside Drive.

The pop-up project launched on May 5, 2017, as part of a collaboration between Civic Commons and the Memphis Grizzlies. Capitalizing on the “Memphis in May” festival’s annual closing of Front St., Civic Commons organizers were able to block off part of Riverside Drive for a pop-up café and two basketball courts. Admittedly, this resulted in increased traffic congestion and, subsequently, less-than-enthused reactions from local drivers. But, generally, RiverPlay park has been a beloved attraction on the Riverfront. RiverPlay boasts more than 200 visitors per day on weekends and about 100 per day during the week. Official hours start at 3:00 PM, but local kids and teens can be seen shooting hoops all hours of the day.

The fact that RiverPlay has stayed a popular hang-out spot after the end of “Memphis in May” attests to its success as a pop-up project. RiverPlay’s organizers are optimistic that this temporary solution to increase tourism and safety at the riverfront will result in the implementation of Complete Streets infrastructure after the project ends in August.

If you’re in the Memphis area before August, make sure to check out RiverPlay park! Visit here more updates on what we’re up to at PDS 2017.