A conversation with Danielle Harris 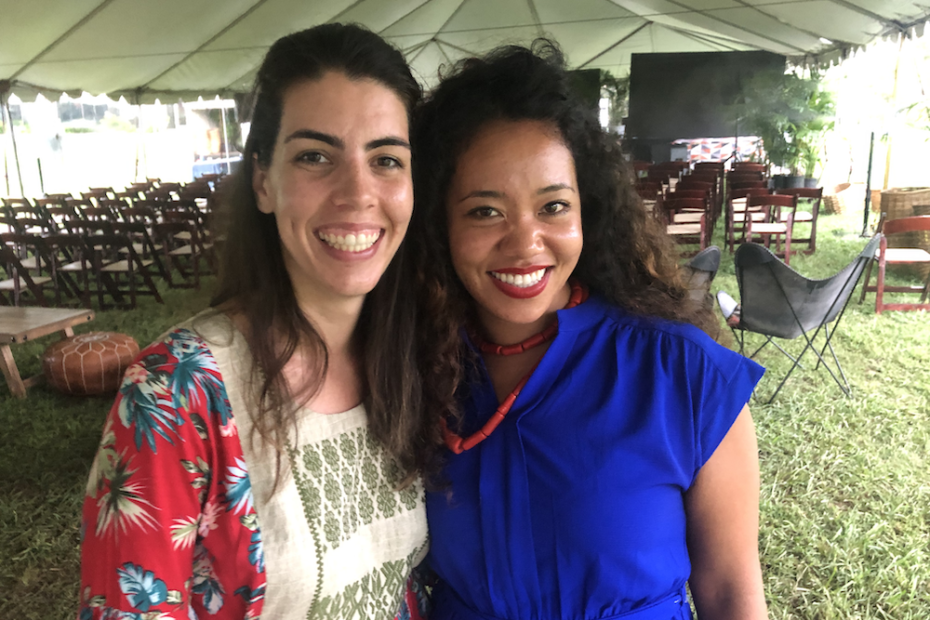 Meghan chatted with Danielle Harris, Elemental Excelerator’s Director of Mobility Innovation. The interview has been edited for clarity and length.

MC: Hi, Danielle! Thanks for taking the time to speak with me! I’d love to know what’s your favorite way to get around?

DH: That’s hard for me. I like walking because there’s a chance that you might have a conversation with somebody. And I don’t have to worry about parking anything or navigating. I hate looking for parking, a bus stop, a bike rack or bike station, so definitely walking.

MC: I hear you, if only bike parking was more available everywhere! And what’s your favorite public space?

DH: Transit stations. This includes airports, ideally with an indoor mezzanine overlooking the main floor. My spirit animal is a cat, so like a cat I’m always looking for a discrete high perch to people watch.

MC: [laughing] Amazing, do you have cats?

DH: I have one at my mom’s. The only thing that would make my home in Oakland better is a cat!

MC: How would you describe Oakland? What’s your favorite thing about it?

DH: I wish I found Oakland later in life because I can’t fathom leaving. I love the bold and beautiful people of Oakland, they’re so resilient, they’re so joyful, they’re so brazen with their soul. It’s inspired me a lot, and I feel this energy within me now. When I came to Oakland nearly 9 years ago, the people overwhelmingly welcomed me. It really felt like family. Oakland empowered me to be authentic — find my voice and the courage to fight for the change I believe in. Oakland’s soul is contagious. It’s a truly magical city. I had an infrastructure committee meeting last night where I felt Oakland’s uplifting spirit in supporting community.

MC: It’s great when you find an inspiring, welcoming community that encourages you to be vocal and empowered. How did you become interested in mobility?

DH: This is a long story. Basically, at the age of 18, as an intern, I became a train therapist. I developed an LRV (light rail vehicle) on-time performance study for the first new rail line that connected to the Bayview in San Francisco. My job was to collect data as to why it was so slow in comparison to a well-used bus route that was a workhorse for a primarily Black and Chinese immigrant community on the southeast edge of the city. I measured the time it took for passenger boarding, doors opening and closing, and whenever the train stopped, noting why it stopped. It had its own exclusive lane and there was supposed to be some type of signal priority, but it was dramatically slower than the bus. So much so that people were literally crying for the bus.

While I was clocking train doors and frequent stops, the people sitting beside me on the train shared their irritations about the new rail. They would ask me, “Why did you take my bus? How come no one talked to me?” I didn’t have any talking points, no numbers to rationalize this “improvement.” Elderly seniors told me their stories of being late and turned away for long-awaited doctor appointments, tired mothers fumed about the additional time it took to get home to their children, and students aired frustration for having to wake up even earlier for a train that may not even come. All I could do was listen and empathize.

I learned so much and that’s what helped me realize that this may be a technical field, but it really is a game changer for so many people. I learned the power of mobility and how it could impact people’s lives for the better.

MC: What kinds of problems are you trying to solve or understand more deeply?

DH: I want to build inclusive streets that don’t just account for all modes, but also accommodate all people comfortably. When I was interning, street design was primarily for the car, and most of the data I had was focused around car volumes, car speeds, and collisions. Whoever collects the data defines the priorities and problems to be solved. I’m trying to democratize the streets.

That’s the biggest thing that’s appealed to me about Numina — everybody has a voice and you can see each mode represented, not just cars.

MC: What are some of your favorite types of mobility challenges to work through?

DH: This was a question I answered on Twitter a few months ago. Most of the transportation sector is divided into little fiefdoms. There are people very focused on bicycle amenities, and people very focused on specific types of transit, or accessibility, or street design, or signals, or parking. There’s infighting. But the “white walkers” are coming! Look at the bigger problems: climate change, inequity, ability to regulate streets, and bigger things that are really affecting people. That’s the biggest challenge in mobility, getting everybody to reassess party lines and realize we’re all on the same side.

MC: Yes! The white walkers are coming, we have to unite and focus! I love the reference. How do you feel technology has impacted your work?

DH: It’s been a complete and utter game changer. It’s solidified my role as a transportation therapist. I emphasize that this is change and it’s going to be uncomfortable and different. But, if we embrace it and we say what we want versus what we don’t want, we can build something even better than we currently have and truly enhance our lives.

Technology isn’t meant to be painful. I feel I have gone from a super technical background of designing streets and curating spreadsheets to figure out “the problem” – the root. Now my magic is at the table, empathizing and finding common ground for a path forward. With Elemental Excelerator I’m working to make tech less scary for people in government, and harness its potential to empower cities. But I’m also trying to teach people in tech how they can be more graceful and empathetic to the concerns of government.

MC: I feel like I’ve seen you play therapist, I think you do a great job! On that thread of being empathetic to the concerns of government, I’m curious, how do you define “smart city”?

DH: It’s challenging, because we’re all aspiring to become a “smart city”, and it inherently assumes that all cities are dumb otherwise. That’s what puts a nasty taste in my mouth. I was at a VC event for electric vehicles where they found out I was from government. They peppered me with questions with an underlying tone of “Why is government so stupid?” I almost did the ugly cry because I felt like my people were being attacked. Government is not stupid! We’re inherently built to be stable and to move gradually so we protect the people. Technology’s mantra is “Fail fast, break things, learn.” Government can’t afford to take those types of risks because of what is truly at risk – the people. These systems work in different metrics of success. Innovation is really about people and better serving people. A smart city or innovative city acknowledges that it could do better and looks for ways to do better by serving its people in a more thoughtful and intentional way.

That doesn’t sound very techie, but that’s how I approach it. I think there is a lot of tech out there promising to solve problems. I’m very much from the camp of: if you never took the time to learn what someone’s problem is, you cannot start the conversation by saying “I can solve all your problems.” I’ve had plenty of tech companies pitch me, when I was at the city, with their fancy new doodad, telling me that this is going to be the silver bullet of my life. Then I ask them one followup question and they ask, “Why would you want it to do that?” And then I know they have no idea what my problem is, which is infuriating. Knowing that experience from a community and government perspective, I think the biggest challenge is getting everybody to listen and understand each other’s problems.

MC: I think about that, especially for some recent tech products I’ve seen, like, what problems are you solving?

DH: Yes, I’m interested in getting more voices to the table, which means we’re going to present new lenses, new perspectives, and probably find bigger, worthwhile issues to solve. So, if I had to summarize, an innovative city is a more inclusive city.

MC: Yes, I think that’s a great focus, building more inclusive cities. I look forward to seeing how you continue to facilitate that through Elemental Excelerator! Thank you for taking the time to chat and share some of you insights with me!